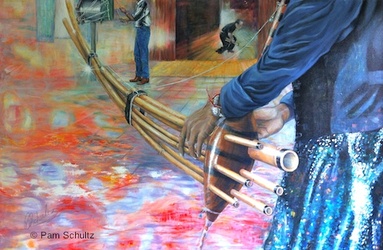 Description
The Qeej is a Hmong ceremonial instrument made of bamboo. It is played along with a large drum, the primary instrument of funeral rites. The Hmong People settled in Australia after their release in 1975 from refugee camps in Northern Thailand (Tapp & Lee (Eds) 2010). They escaped from their homelands in Northern Laos during and following the CIA Secret War during which many Hmong were enlisted to fight between 1962 to 1969.

Contact Pam
Email: pamschultzgallery@gmail.com
Post: PO Box 73 Kuranda 4881 North Queensland, AUSTRALIA
All artworks by Pam Schultz© are covered by the Copyright Law and cannot be reproduced without the artist's permission.